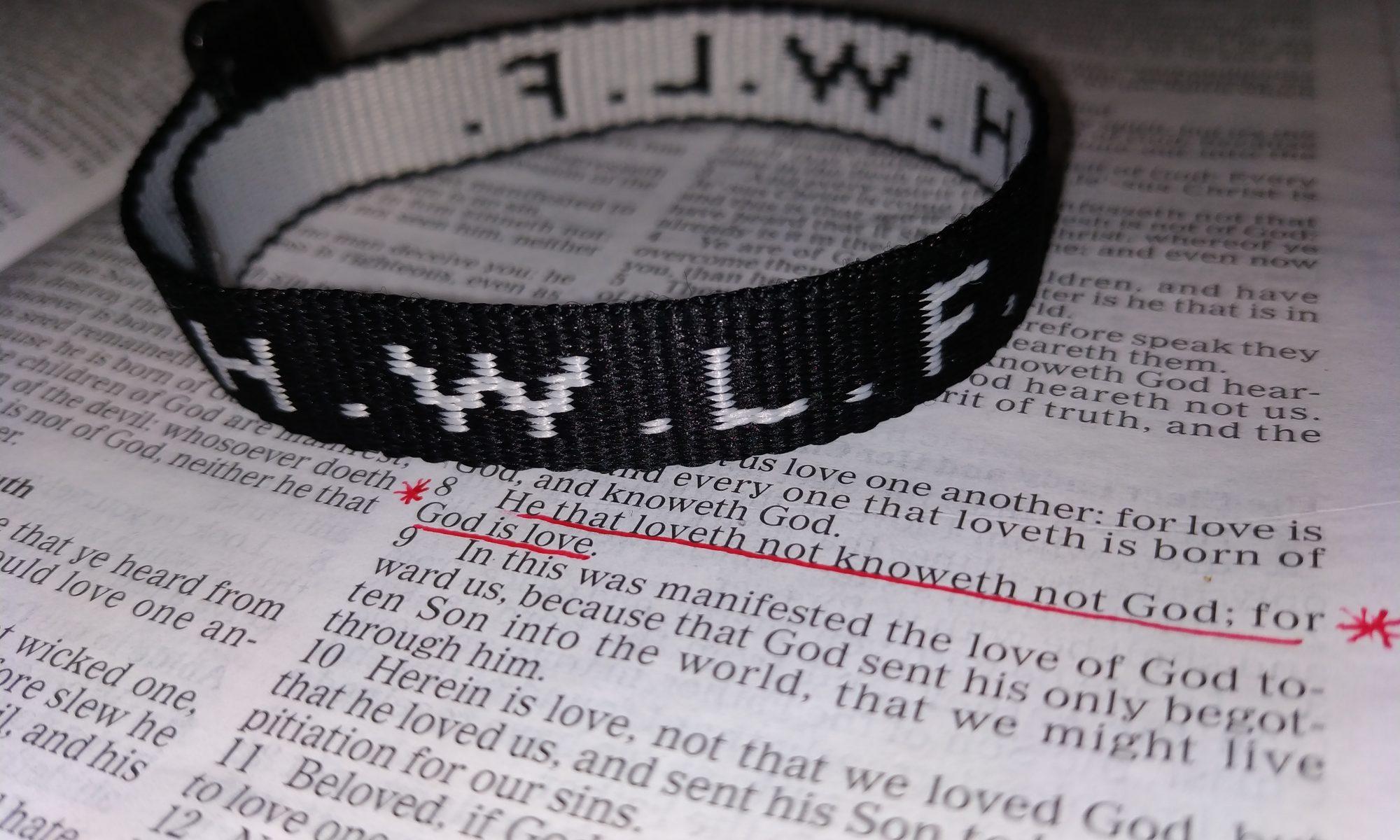 WWJD? What would Jesus do? We’ve heard it numerous times, but where did this Christian catchphrase come from?

Originally, WWJD came about in the early 1990s when a youth group leader by the name of Janie Tinklenberg began a movement to help the teenagers in the group to remember the phrase by creating bracelets for them. They were in Holland, Michigan. But now WWJD is worldwide.

What I found to be super neat is WWJD goes back way further than 1990. It goes all the way back to 1891, in a sermon preached by none other than Charles Spurgeon. (Fun Fact: the name of my dorm at Maranatha is Spurgeon!)

WWJD seeks to encourage Christians to behave as Christ would have behaved.


“For even hereunto were ye called: because Christ also suffered for us, leaving us an example, that ye should follow his steps:”

As we are called to be “Christlike.” The meaning of “Christian” simply is someone who follows Christ. But what we follow forms us. As we pursue Jesus, it is essential that we become more like Him. But how can we accomplish this?

We to ask ourselves, “What would Jesus do?” In nearly all cases, we can find the answers to this question in God’s Word. But in certain situations, we need to apply principles we see in the Bible because there is not a clear command given. But is there any one single principle that guided Jesus’ actions?

What would Jesus do?

Jesus obeyed the Word of God perfectly, just as we should be striving to do. But in those situations I mentioned, the ones where no clear command is given, principles, what principle guided Jesus? Love.

The Way Jesus Responded to the World

Jesus loved all the people in the world. After all, “Jesus loves the little children, all the children of the world.” He doesn’t love the sin or the ways of our fallen world, but He does choose to love us. Without His love for us, why would Jesus have come to earth anyway?


“For God so loved the world, that he gave his only begotten Son, that whosoever believeth in him should not perish, but have everlasting life.”

Jesus Christ loves you and I. Yes, we do need to accept Him into our lives for salvation, and for deliverance from sin. However, before anyone ever accepted Him into their heart, Jesus loved the entire world. We read how God is patient, not wanting anyone to die without first receiving His free gift of salvation. (2 Peter 3:9) We are loved by Jesus in a way we can never fathom in our finite minds.

” Oh the deep, deep love of Jesus
Vast, unmeasured, boundless, free
Rolling as a mighty ocean
In its fullness over me.”

The Way Jesus Responded to Sin

You already know what passage I am turning to. In John 8:1-11, Jesus goes to the temple to teach the people. While He is teaching, the scribes and Pharisees brought a woman who was caught in the act of adultery to him, asking whether she was to be stoned as the law taught them. This woman was a sinner, and she had been caught in her sin! What would Jesus do?

Jesus simply says, “He that is without sin among you, let him first cast a stone at her.” (John 8:7) He used a biblical truth to convict her accusers, and the accusers left, one by one until only Jesus and the woman were the only people left in the temple. When Jesus looked up and saw that everyone had left, he asked the woman if anyone had condemned her? She said that no one had.

” And Jesus said unto her, Neither do I condemn thee: go, and sin no more. “

When dealing with sin, Jesus did not condemn. He protected in love and truth (an important concept when it comes to biblical love). Yes, He still instructed her to stop sinning, but what did Jesus do first? Jesus responded in love.

“But we make His love too narrow
By false limits of our own;
And we magnify His strictness
With a He will not own.

For the love of God is broader
Than the measure of our mind;
And the heart of the Eternal
Is most wonderfully kind. “

The Way Jesus Responded to Suffering

” He was oppressed, and he was afflicted, yet he opened not his mouth: he is brought as a lamb to the slaughter, and as a before her shearers dumb, so he openeth not his mouth.”

Jesus was whipped. Jesus was mocked. He was spit at. He was bruised. He was beaten with rods. They placed a crown of thorns on His head. He was crucified on a cross, nailed by his hands and feet to a piece of rough wood, between two criminals. He bled and died — for you and I.

“But he was wounded for our transgressions, he was bruised for our iniquities: the chastisement of our peace was upon him with his  we are healed.”

Jesus didn’t suffer for Himself. He suffered for us. He endured so much pain and suffering and death itself. . . because He loves us. But throughout His suffering, it is interesting in light of Isaiah 53:7 that Jesus did open His mouth. The context of that verse was speaking about how Jesus didn’t say anything to oppose or resist His suffering. But He did say something that revealed His response to the entire situation.

“Then said Jesus, Father, forgive them; for they know not what they do.”

Jesus, as He was bleeding to death, hanging from a cross, and gasping for air, put all of His energy into making a final gesture of love before giving up His spirit to God. Who was He asking forgiveness for? He was asking God to forgive the people mocking Him and who were the cause of His suffering. In every circumstance Jesus was placed in, He chose to act in love.

He Would Love First

” He that loveth not knoweth not God; for God is love.”

What does that verse mean to you? You may have had a difficult time reading this blog. It may have challenged your beliefs. But when we ask ourselves, “What would Jesus do?”, the answer we find is, “He would love first.”

I first came about this phrase in late November, and as I thought and reflected upon it, it became my focus for 2019. God is holy. God is sovereign. God is just. God is omniscient. God is infinite, and as I bring up this subject by no means am I seeking to discredit any of His divine characteristics. But God IS love. Jesus loved first. What should we do? We should love first. God’s love motivated Him to sacrifice His own Son for us. We need to be careful never to discredit the power or need for Godly, agape love.

Love leads to the Lord.

Note: He Would Love First is not an original thought. I found a website and discovered the answer to WWJD there! That is where I was able to purchase my HWLF bracelet. They send you two bracelets even when you order only one because they want you to “pay it forward” to someone else. They ask you to share the love of Christ with someone and then give them the bracelet and explain what the motive behind your action was. I love the mission and heart that they have for the lost as well as for the church itself.